This season urges us to reflect on what gives us meaning. At Active Living By Design (ALBD), we often find that it’s our relationships.

Earlier this fall, ALBD promised to reintroduce its readers to community health leaders with whom we have worked in the past, and I am personally grateful to stay in touch with Rocio Muñoz, a woman I admire and from whom I have learned so much.

In 2008, the Benton County Health Department (BCHD) in Oregon formed Creciendo en Salud (CeS) as a collaborative effort to improve food and active living environments in the county and the City of Corvallis. The CeS approach engaged community members throughout the initiative. The Robert Wood Johnson Foundation (RWJF) funded this effort as part of the four-year, 50-community grant initiative Healthy Kids, Healthy Communities.

Rocio is currently the Equity and Inclusion Policy Specialist at BCHD and a “cultural broker” among co-workers, mission partners, policy makers, residents, and even family members. Rocio was born and raised in Northwest Oregon as part of a hard-working immigrant farming family. The first in her family to graduate from college, she served as a legal advocate before becoming a health navigator for BCHD, which is responsible for improving the health of nearly 88,000 residents and a steadily growing immigrant population.

What capacity did the CeS initiative help build in you and how have you put what you learned from HKHC into practice since funding ended in 2012?

Prior to CeS, I was the lead health navigator linking Latino families and children to direct services. That work was reactive and often involved putting out fires. My role as CeS coordinator required that I step into report writing, budget tracking, and speaking regularly to a grant officer. Since then, I’ve done work that is much more proactive—it’s like a gear switched, and now it’s more forward thinking on matters that include policy. Now, I pick up the phone and talk to commissioners about community engagement and work to have Latinos appointed to committees. I am more confident in this realm and have found my passion. I can see that if you create a policy or process, you can make a bigger change instead of just meeting people’s needs one at a time.

I wish I didn’t have to have all these conversations about equity, but it’s so necessary. If a budget does not reflect it then it won’t happen. Now that I’ve been in a leadership role in the PTA at my children’s school, I’m aware of the importance of where the money goes within the school district’s budget.

You were briefly featured in ALBD’s blog in July 2014. At the time, you mentioned improved community engagement because of your CeS initiative. How has that been sustained?

Since 2014, resident engagement has gotten even stronger. The PTA has grown from five Latino attendees to 40 parents coming to meetings. Previously, we only spoke in Spanish, even about policy topics. But now white and Latino constituents are joining together bilingually. Latinos now feel more comfortable speaking to whites, which is largely due to the health navigators embedded within schools. Parents are more comfortable asking questions during parent-teacher meetings. And as we get even more diverse, Latino parents are welcoming Arabic-speaking families and other ethnicities.

How has local government changed as a result of CeS?

We have seen other ripples from HKHC. I was invited to be on a task force to shape Corvallis’ new Community Involvement and Diversity Advisory Board to boost resident input in government. We also do simultaneous English–Spanish interpretation, which was modeled in public meetings for a park planning process during the CeS initiative. We also recently supported the parks department’s community engagement process for the North Albany Park master plan by doing interpretation. Now, some city and county departments have interpretation services built into their agencies’ budgets.

How are you feeling about the outcome of the election as a bilingual, bicultural public health practitioner?

It’s often difficult to blend my two identities. My role as a public health practitioner is to raise awareness about issues that families experience and how the current environment impacts them. Since the election, I’ve noticed a lot of reflection from people I work with. They seem stunned by the outcome and afraid of what it might mean for immigrants and health equity. All of a sudden, it seems like a big issue for my friends and co-workers, but minorities have been affected by systemic inequities for a very long time. I wonder, “Why now? Why didn’t it impact you over the past eight years? Why wasn’t it more important to you before?”

Our white allies need to speak up, but many feel they lack the tools. As a practitioner, I tell allies to use their privilege. With the direction we’re going, we’re going to need you. Next time something’s not okay, you need to speak up. It can be anywhere: during meetings, even in emails. Everybody is doing their best but they have to take action.

How do you see the election impacting health in Benton County?

It’s already impacting mental health and stress. I am chair of the PTA at Garfield Elementary. Recently, I heard that kids were sharing fears in the counselor’s office that their parents or class mates would be deported. Both white kids and Latinos are afraid that they will lose family members or friends. I even had to tell my daughter, “We’re strong and we’re all here together and we’ll be OK.” I can tell this to my children, but many Latino families in our region cannot if their documentation status is different. Some parents are saying they can take on the fear, but it’s not fair for an eight-year-old to have to deal with this.

How did you become the equity advocate you are now?

It’s been a struggle since I entered public school in Hood River as a minority and daughter of farm workers. Around 50 percent of the school population was Mexican, but we were discriminated against and told, “Go back to your country.” When you’re young, you don’t always know what it means but, unknowingly, you learn skills and gain tools to defend yourself. I’ve been building my tool box forever. I now have the courage to say, “That’s not right.”

What steps are you and your colleagues taking now to promote equity?

We are working to make Benton County a safer place for immigrants. One of our county commissioners approached us to develop a sanctuary declaration. We are happy to help but hoping that the work goes even further. We have to work with law enforcement on how people are treated and raise public awareness. Most people don’t understand the complexity of the immigration process. It’s important that we all understand why our system is the way it is.

What I can do nationally is limited. Instead I ask, “What can I do where I live, where I’m already affiliated?” I like seeing people coming together now and being more aware of the plight of immigrants. I’m going to continue to do what I do.

What are you thankful for?

I’m thankful for those of us who are still here. I’m thankful for good leaders, commissioners, and people in our community. I’m glad that our community hasn’t seen actual physical violence directed at immigrants and other minorities. My co-workers and acquaintances are struggling and I see them come to tears. I’m also thankful for that: for their recognition. There needed to be an awakening. 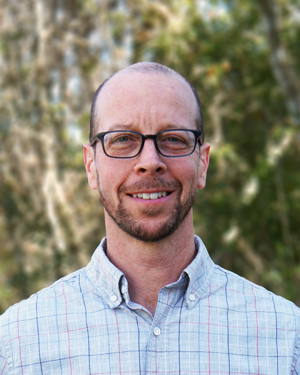