How I Benefited from Unfair Housing

Fighting American Nationals picket in front of CORE (Congress of Racial Equity) protesters who were demanding Levitt & Sons to open the Belair subdivision in Bowie, MD, to African Americans. August 1963.

My hometown, Bowie, MD, turned 100 last year. The city celebrated its proud history as a railroad town, the cradle of thoroughbred horse racing, home to Bowie State University, a fast-growing suburb, host to a minor-league baseball team, and (now) a diverse community.

I grew up playing ball, walking, and riding bikes all over town: to school, baseball practice, friends’ homes, and the store. The city provided ample parks and bike paths. Schools were strong, within walking distance, and well maintained. We had access to healthy food in nearby grocery stores and backyard gardens. And we generally felt safe as we ventured out, even at night. This was an easy place to grow up as a healthy kid.

In the 1960s, Bowie joined the club of iconic Levittown suburbs, conceived and developed by the ambitious Levitt & Sons. “Belair at Bowie” became the state’s most significant suburban development. The developers sold more than 200 homes in the first four days—many properties sight unseen. Middle-class families flocked to Bowie, and it grew from barely 1,000 people in 1960 to over 35,000 by 1970. I still remember seeing Levitt & Sons’ colorful promotional packet that my dad kept in a drawer. Their ambitious vision was a “complete” community, with schools, shopping, parks, and other amenities. However, racial diversity was not part of their vision.

Years later, after moving away from Bowie, I realized how privileged I had been to thrive in that setting, nurtured by family, friends, and so much opportunity. I became acutely aware of race in 1973, when the Prince’s George County school system abruptly implemented its desegregation plan—a response to racial segregation and deep inequity in public education. I was surprised by the buses full of African-American kids and wondered why this was happening; the new students didn’t seem to want to be at our school any more than we wanted them to be there. There was conflict between the new students and their white teachers. There were fist fights during lunch and recess. It’s no wonder that the transferred students felt alienated, defensive, and unwanted in their new surroundings. 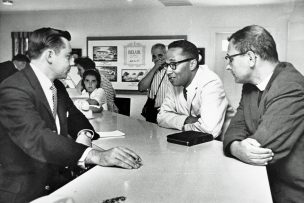 Levitt & Sons refusing to sell a home to Karl D. Gregory at the Belair sales office in Bowie, MD. August 1963.

As in their other subdivisions in New York, Pennsylvania, and New Jersey, Levitt & Sons restricted sales of homes in the new Belair development to “qualified white buyers.” While Prince George’s County is now known for its thriving African-American population—it is the nation’s most affluent county with an African-American majority—Levitt clearly tried to make this a “whites-only” community. During a 1957 community meeting of the Mitchellville Civic Association, William J. Levitt used thinly-veiled racist language affirming that his Belair development would “not be any incipient slum area.” (The Evening Star, December 19, 1957)

For years, civil rights and racial equity advocates have fought practices and policies in government and private institutions that intentionally keep people of color from becoming home owners in white suburbs. Despite being outlawed by the 1968 Fair Housing Act, the legacy of redlining and race-restrictive covenants continues to this day. In addition to severely limiting African-Americans’ opportunities to build wealth, geographic segregation contributes to disparities in health outcomes. The impacts of redlining have recently been exposed through new analyses overlaying health status statistics with 20th century real estate maps, which originally helped loan officials maintain the status quo. The Mapping Inequality tool shows how segregation lines in cities across the country were drawn during the days of the New Deal.

In 1963, the Prince George’s Chapter of CORE (Congress of Racial Equality), a civil rights and fair housing advocacy group, focused on the Belair subdivision. After CORE members were unable to qualify for homes solely because of their race, the group protested by picketing and holding sit-ins. Some white residents held their own counter rallies. Within a week, an injunction banned CORE members from picketing on the subdivision’s “private” streets. And despite public pressure, Levitt & Sons stuck with their exclusionary approach for a decade. This form of racism did not end until Prince George’s County’s open housing law and the federal Fair Housing Act were enacted. Eventually, white homeowners began selling to African Americans and other people of color.

Despite Levitt’s vision for an all-white community, Bowie has become a diverse city. In 2010, 49 percent of Bowie residents were African American, six percent were Latino, and four percent were of Asian descent. But it took decades to get there, and meanwhile, so many were denied access to the opportunities for health and well-being that I had. I hope it doesn’t take 40 more years for everyone, no matter who they are or where they live, to have those same opportunities. If we all intentionally focus on health equity in our work in communities, it won’t. We can’t undo these past wrongs, but the first step in the right direction is to know our history.

Community collaborator, enthusiastic brainstormer, and devotee of down time