I first went to Wrightsville Beach and Wilmington in New Hanover County, NC when I was a young kid on spring break from school. I remember being so excited, because we’d recently moved to North Carolina from Western New York, where it’s rare to bask in the sun in April and unheard of to drive to the ocean for a weekend trip. Af

ter spending the day at the beach, we drove to Wilmington’s historic downtown, walked around, saw about four city blocks and then got back in the car to drive home. Twenty-five years later, I worked with the City of Wilmington through the Fit Community initiative, and that gave me a new perspective on healthy community change work.

While the area is still considered a tourist destination, the Wilmington Metropolitan Planning Organization (WMPO) and many other governmental agencies, businesses and non-profits are investing in New Hanover County as an active community for residents. This didn’t happen overnight. Nor was there a day when all the county organizations agreed on this goal. These changes are taking time and requiring intentionality.

At Active Living By Design, we often say that the obesity epidemic didn’t happen overnight, and therefore it won’t be solved overnight. But for some reason, whether the issue is obesity or a policy or built environment change, many politicians, community members and even funders want to see sweeping changes in two- to four-year cycles. Creating a healthier community, like they are doing in New Hanover County, is an evolving process that outlasts grants and terms in office. That is the norm. That should be the expectation. It requires an understanding that the sum is greater than any one part. 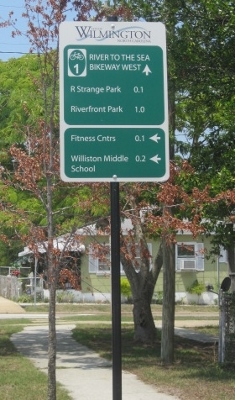 , during their Fit Community grant period (2009-2010), the City of Wilmington created the first bicycle boulevard in North Carolina. The Ann Street Bicycle Boulevard provides a safer alternative to the main thoroughfare, Market Street. It connects to the Riverfront Farmers’ Market, the River to Sea Bikeway (linking Wilmington to Wrightsville Beach) and nearby schools and neighborhoods. Signage, sharrows, bicycle fix-it stations, crossing beacons and median cutouts are all in place to provide bicyclists with easier access to multiple destinations.

Around the same time, other long-term efforts came to fruition. The Wilmington City Council passed its Comprehensive Pedestrian Plan in 2009, and the Wilmington/New Hanover County Comprehensive Greenway Plan was approved in 2013. Additionally, construction of the Gary Shell Cross-City Trail began eight years ago, and now has 13 of 15 miles are complete.

These and other efforts led to the League of American Bicyclists designation of Wilmington as a Bicycle Friendly Community and UNC-Wilmington a Bicycle Friendly University, only one of four communities in North Carolina to receive both recognitions. There are many more accomplishments worth noting–like how the community exceeded its Bike to Work goal last month and doubled participation from last year, and how the North Carolina Department of Transportation just designated Wilmington as a Watch For Me NC community.

Each of the efforts individually has an impact, but when you add them up and step back, you can see significant community-level change. Let’s learn from New Hanover County’s long-view approach to creating a vibrant community for residents and tourists. Transformation and persistence takes time, and down the line it’s hard to not notice the benefits.

Now that I’m a parent myself, I’m excited to make the two-hour trip with my son, where we can park the car, and go far beyond a four-block radius to eat, check out downtown, visit neighborhoods, play on the beach and do so much more than I could do 25 years ago….and we’ll be doing it all by bicycle.